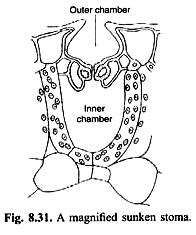 What is Sunken Stomata ?

Sunken Stomata can be defined as a  type of stomata that are located below the surface of a plant leaf or stem, as opposed to being on the surface. Sunken  stomata are found in plants that live in arid or semi-arid environments, as it helps to reduce water loss by minimising the amount of leaf surface exposed to the air. Sunken stomata also  help to protect the plant from damage caused by high levels of sunlight or extreme temperatures.

Also Check – Mechanism of opening and Closing of the Stomata

Also Check – What is the Function of Stomata ?

Examples of plants with Sunken Stomata