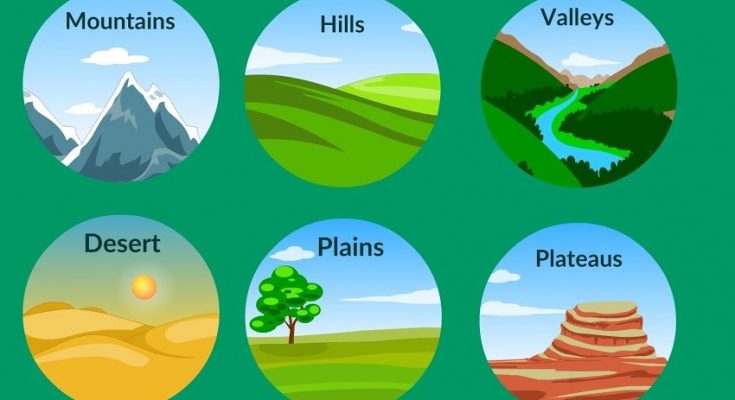 Land Forms of The Earth

How are Landforms Formed?

The landforms are a result of two processes:

The external process is the continuous wearing down and rebuilding of the land surface.These processes are generated by the external agents like-air and water and cause change in the surface of the earth.

Hill is a land surface higher than the surrounding area.

A steep hill with an elevation of more than 600 meters is termed as a mountain.

The wearing away of the earth’s surface is called erosion in which the surface is being lowered, while the process of rebuilding is called deposition. These two processes are carried away by different agents, like- running water, ice and wind.

What are the major landforms of the earth?

On the basis of elevation and slope, the landforms can be grouped into

The permanently frozen rivers of ice found in some mountains are called glaciers.

Mountains are of three types:

The advantages of mountains are as follows:

The advantages of plateaus are as follows:

How Plains are formed?

In Asian continent, Plains are formed by the Ganga and Brahmaputra in India.

The  Yangtze in China

The advantages of plains are as follows:

Landforms and the People

Human beings are living on different kinds of landforms in different ways. Leading a life is much tougher in mountain regions than plains. We can easily grow crops, build houses or a road in the plains than the mountains. Sometimes, natural calamities like earthquakes, volcanic eruptions, storms and floods cause widespread destruction and huge loss of life and property. But through awareness programmes about such incidents we may lower the risks. Usually, we use the land in a wasteful manner, For example constructing houses on fertile land. Likewise we throw garbage on land or in water making them polluted.

3 Comments on “Major Landforms of The Earth Class 6th”